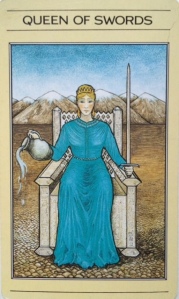 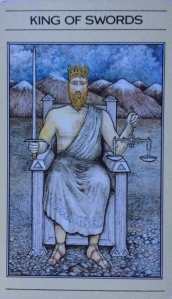 The cards have really been going in one direction lately so this morning I shuffled the heck out of the deck, took a deep relaxing breath, fanned out the cards…and then two cards really wanted to stick together when I went to select one. Who am I to argue with them? When this happens, as it sometimes does, I always pull them both. It amused me to no end to see both the King and Queen of Swords* come up! Here we meet Atalanta (the Huntress) and Odysseus (the Wily One). Atalanta often times represents perfectionism – which as you know is elusive at best – and Odysseus represents leadership and strategy. As we head into the weekend these are two good things to reflect upon. That creative thing that you have been working on or have been thinking about doing? Well get to it. Get it out there. No more hemming and hawing and thinking it isn’t good enough, or it isn’t ready.

*The King and Queen of Swords are not a married couple. Atalanta did marry but it was doomed from the start. Odysseus was married to Penelope (the Queen of Wands).