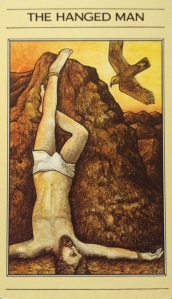 Well this is quite a change from the past two days. Or is it really? Here we see Prometheus, who had the gift of foresight, being punished by Zeus for giving fire to the human race; something Zeus forbade. Prometheus didn’t do it defiantly or impulsively. He truly believed this was the right thing to do and was willing to deal with the consequences with the hope it was for the greater good and would lead to something better. This card often represents a willing sacrifice in the hope that it will lead to a new phase, and a new sense, of life. It’s about surrendering control and letting what will happen happen after the sacrifice is made. There is fear, and anxiety, but also tremendous hope. So! Are you holding on to something you need to let go of? Something tangible or something less obvious, like an attitude or a belief? Whatever it is on some level – like Prometheus with his foresight – you know what you need to do to move forward.